Are independent voters being left out of city elections?

Chandler voters will decide on city leaders this year, but some worry independent voters aren't getting a fair shake.

Chandler and many other Arizona cities will hold elections in August that coincide with statewide primary races. To vote in the partisan state races, voters must decide whether they want a Republican or Democratic ballot. Independent voters on the early voting roster do not automatically get primary ballots sent to them like committed Republicans or Democratss. They must reach out to clarify which ballot they want.

City races — although nonpartisan — get wrapped up in that issue because they share the ballot.

In Chandler, that's about 53,000 independent or third-party voters. The city has about 92,000 registered Democrats and Republicans.

To get around it, an independent voter must either select a party's ballot or request a nonpartisan ballot that would include only local races.

He calls it voter suppression, although Chandler handles it the same way most cities in Arizona do. 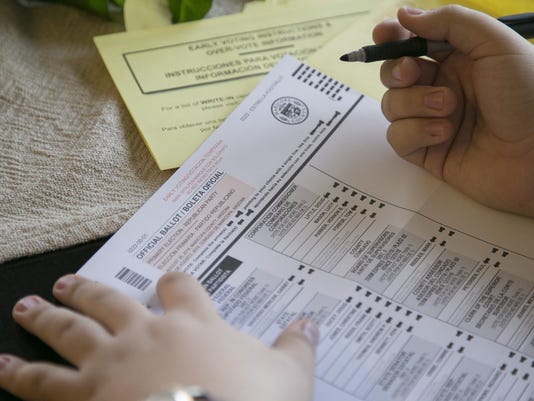 Hartke said changing the election cycle "would be giving callous disregard to the will of the voters."

However, Phoenix, Goodyear and Tempe hold their elections outside the partisan political election cycle. This allows these cities to send ballots to all eligible voters on the early ballot roster.

State law prohibits all-mail elections during consolidated elections where state and federal partisan candidates are on the ballot, Hebert said.

Sample ballots, which the law requires to be sent to all voters, also include information on how to select a ballot if you're not registered with a party.

Want to run for office?

Those looking to run for mayor or council in Chandler must submit nomination papers between April 30 and May 30. The process includes collecting at least 1,000 valid signatures and submitting a financial disclosure statement.

Up for grabs are three council seats and the mayor's post as longtime Mayor Jay Tibshraeny faces term limits.

The primary election is Aug. 28. If candidates do not get enough votes to secure an outright win, a runoff election will be held Nov. 6.