It makes no sense to let independents vote in every primary election except the one for president.

The governor and I may disagree on other policy matters, but we shared an observation that day. We saw eligible U.S. citizens denied the right to vote, and we agreed that this is wrong.

I still stand firm on the principle I did then, but with more urgency. It's time for my party, the Arizona Democratic Party, to open the 2020 presidential primary to independent voters.

Elections should have 1 set of rules

The biggest threat to our elections is misinformation.

Because of our odd primary systems – we allow independents to vote in federal, state and local primary elections but not in the presidential primary – Arizona creates unnecessary confusion and misinformation. The 2016 election is the case in point.

We should have one set of rules for all primaries.

It's possible that the Democratic Party’s nominee will be the next president of the United States. Arizona’s independent voters must have a say in the selection of a nominee where any party has a contest.

In addition to reducing voter confusion and misinformation, there are other reasons why this idea’s time has come. 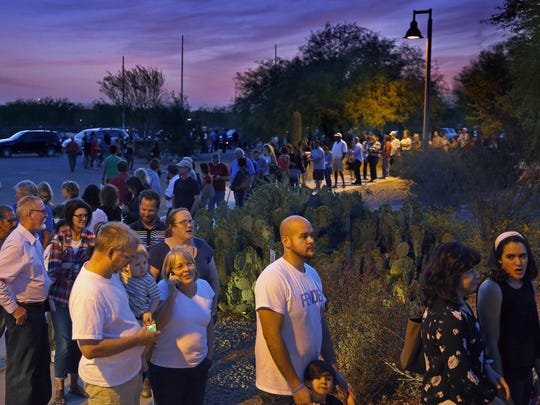 Some voters waited in line for 6 to 7 hours to cast a ballot in the 2016 Presidential Preference Primary. Some were registered independents who thought, mistakenly, that they could vote in the closed primary. (Photo: David Kadlubowski/The Republic)

The presidential primary is a taxpayer-funded election for a private political party. If the Democrats – and Republicans, for that matter – want a private election, they should pay for it. It is wrong for Arizona to exclude one-third of taxpaying voters, essentially forcing independents to change their party affiliation to participate.

Allowing independents to vote in the presidential primary also fits into Arizona’s long tradition of pragmatic solutions to solvable issues. Whether they were Democrats or Republicans, our leaders from Carl Hayden to Barry Goldwater to Dennis DeConcini to John McCain sought solutions that worked for all Arizonans, not just members of their own political party.

Democrats should be more democratic

The decision to open the presidential primary to independents is politically significant for both parties. The notions of party-building and exclusivity ring loudly with partisans. But the exodus of voters over time proves that party loyalty is less important than it once was. Arizona’s independence defines the Grand Canyon state.

Lastly, a closed presidential primary presents an interesting tension between two fundamental rights, the First Amendment right of people to associate in private organizations – as our political parties do – and the right of citizens to vote in elections for our leaders. But courts across the U.S. have already ruled. If a party asks to open a closed primary, even where there is a state law to the contrary, independent voters end up winning.

The same motive that pushed me to run for this office now makes me ask my own party to be more democratic – and make every effort to open the presidential primary to independent voters.

As the Jewish scholar Hillel once said, “If I am not for myself, who will be for me? But if I am for myself only, what am I?”