"Here we are," began Patrick McWhortor in his remarks at the joint press conference sponsored by Open Primaries Arizona and Independent Voter of Arizona,  "On the day when 1.2 million voters in Arizona are being told that the only way they can participate in the most visible election in the country, the nomination of someone to serve in the highest office in the land, is to undermine their commitment to being independent by requiring them to change their voter registration to a political party. This is the most sweeping voter suppression effort we have seen in recent history in America – the deliberate exclusion of independent voters." 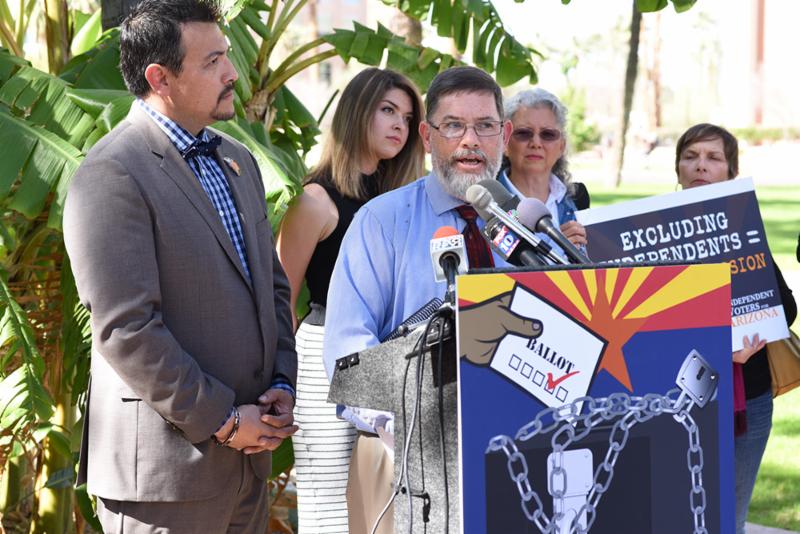 And yet here we are, on the day when 1.2 million voters in Arizona are being told that the only way they can participate in the most visible election in the country, the nomination of someone to serve in the highest office in the land, is to undermine their commitment to being independent by requiring them to change their voter registration to a political party

And how disappointing it is for us to be talking about this extreme partisanship on the anniversary of the birth of George Washington, who in his Farewell Address as President, warned us: The common mischiefs of the spirit of party are sufficient to make it the interest and duty of a wise people to discourage and restrain it.”

But while the parties are locking out independent voters from the ballot box, President Washington’s words are nonetheless being heeded. Independent voters in Arizona are standing up to discourage and restrain the polarizing partisanship that is paralyzing our country.

As Tim outlined for you, four months ago, Open Primaries Arizona and Independent Voters for Arizona joined forces to launch a grassroots campaign of independent voters across Arizona to demand their right to vote in the March presidential preference primary election in Arizona.

Independents from every corner of our state are outraged about being suppressed, and more than 30,000 of them have signed petitions appealing to the State Chairs of the Democratic and Republican Parties in Arizona to let them vote in March without requiring them to change their registration.

These independents are demanding that they be treated equally as voters, and the barriers and extra hoops required of them be removed. The parties can choose to let these voters participate, but so far have refused to do so.

I remember the day when political parties wanted big tents, they wanted to welcome people into a governing coalition. Today, they seem intent on excluding people who do not pass some test of purity, and to that end, they are excluding the largest group of registered voters in Arizona – 1.2 million independents.

And for those who want to claim that the presidential preference primary election belongs to the parties, we point out: these elections are paid for by all Arizona taxpayers, including these 1.2 million independents. How is it fair that they pay for the election, but have their rights as independent voters trampled in the process?

That is why legislation was introduced to de-fund the primary, returning Arizona to a system of private political party nomination for president. Now, while this legislation still does not address the disenfranchisement of independent voters, at least it would remove the hypocrisy of asking independents to fund a system rigged against them. In a moment, Representative Ken Clark is going to talk about his efforts to amend this legislation to support independent voting rights.

Finally, as we stand here today and highlight the suppression of independents in the nomination of our nation’s next president, recognize that the awakening of independents will continue to grow in 2016, as the campaign for Open and Honest Elections seeks to apply the same principles of equality for independents in our state primary elections through the Open and Honest Elections initiative underway as we speak. This initiative, which will be on the November ballot, will let the voters of Arizona decide whether we should level the playing field in our state’s elections to treat all voters and candidates the same, something that does not happen in our current election system. Let 2016 be the year long remembered when independent voters in Arizona stood up for their rights and demanded that they be allowed to participate equally in the democratic process.

Only with the equal treatment of independent voters can we be sure we are protecting the integrity of the democratic process in Arizona.