"We’re here today to talk about the Presidential Preference Election being held on March 22nd -- an historic election and one that excludes independents," said Tim Castro who opened a press conference jointly held by Independents for Arizona and Open Primaries Arizona.  "The resolution to this problem that’s been offered by the state of Arizona is that independents can just re-register into a party. In fact, today marks the last day independents can do so.  What’s wrong with this solution?"

Good Afternoon.  My name is Tim Castro. I’m the campaign coordinator for Independent Voters for Arizona.

We are an organizing center -- working to connect and empower the states 1.2 million independents.  Let’s be clear, independents are 37% of Arizona’s electorate, making them the largest community of voters in the state. 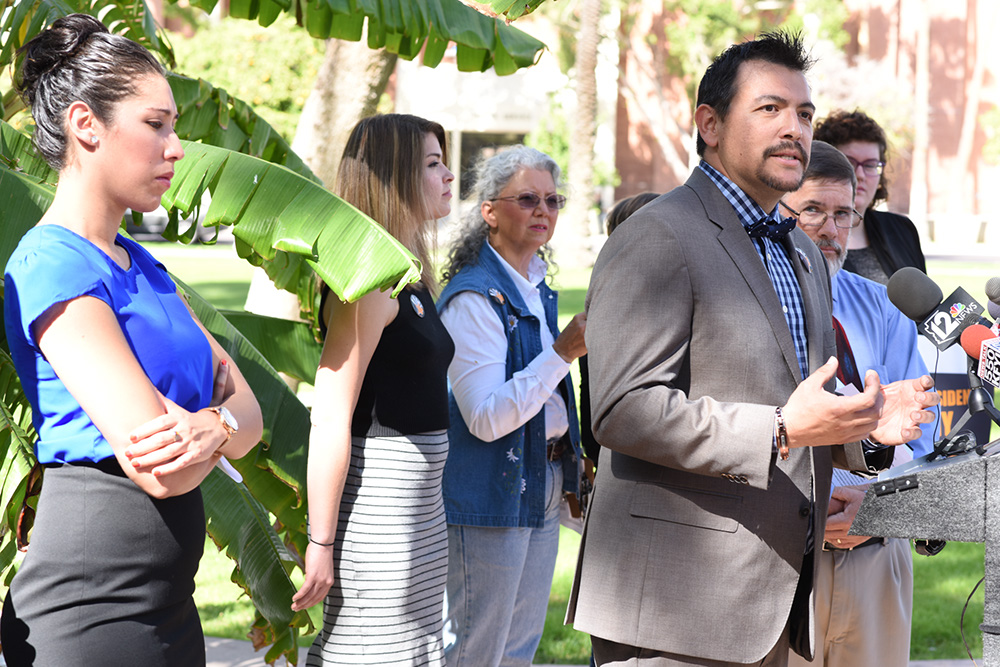 We’re here today to talk about the Presidential Preference Election being held on March 22nd -- an historic election and one that excludes independents.

The resolution to this problem that’s been offered by the state of Arizona is that independents can just re-register into a party. In fact, today marks the last day independents can do so.  What’s wrong with this solution?

Number one, why should independents be required to RE-registered in order to vote?

Number two, only a few thousand HAVE re-registered, a drop in the bucket of the 1.2 million independents in the state.

Number three, why should the Presidential primary be the occasion for the parties to capture independents -- which everyone wants and everyone needs to win elections -- as opposed to respecting independents for who they are and granting independents full access to the political process without having to join a the party to achieve that?

Independents are not a subordinate group of the major parties.  They are the largest group of voters in the state and this in an extended battle to secure access to the political process at every level.

Five months ago, we began to survey independents across the state.  You’ll hear more about THAT from my colleague Amanda Melcher who runs our phone bank.

But one thing we discovered right a way was that there was resounding support -- I'm talking about 98% of respondents! – wanted to see the Presidential Primaries opened so that independents could participate. So we listened to that and we got to work.

Together with our colleagues at Open Primaries Arizona, we’ve spoken with tens of thousands of independents all over the state who signed onto a letter to the Democratic and Republican chairs asking them to open the primaries.  We spoke to independents in 52 cities who circulated the letter to gather signatures.

To date, the Presidential primaries remain closed to independents.

That’s why we’re are also creating new electoral coalitions that bring together independent-minded Democrats, Republicans and independents in support of new models for nonpartisan governance.

We are proud to be a founding member of the Open and Honest Coalition that is bringing important democracy reforms before the voters this November.  My colleague Patrick McWhortor will have more to share on this in a moment.

One our state leaders, Kim Ames-Wright, is featured in a commercial about to air statewide supporting the two initiatives sponsored by the coalition -- open and honest disclosure of campaign funding and open and honest elections where all voters get to participate at the state and local level.  She talks about the lock out of independents from the Presidential Primaries as well.

However, we can’t impact on the Presidential Primaries and force them open through the initiative process.  That’s why we continue to demand the political parties in Arizona do the right thing.  They should follow the path taken in half the states across the country where independents can vote in presidential primaries.

The most important political conversation taking place today is not just who we elect as the next president, but whether our democratic process will work for all the people.